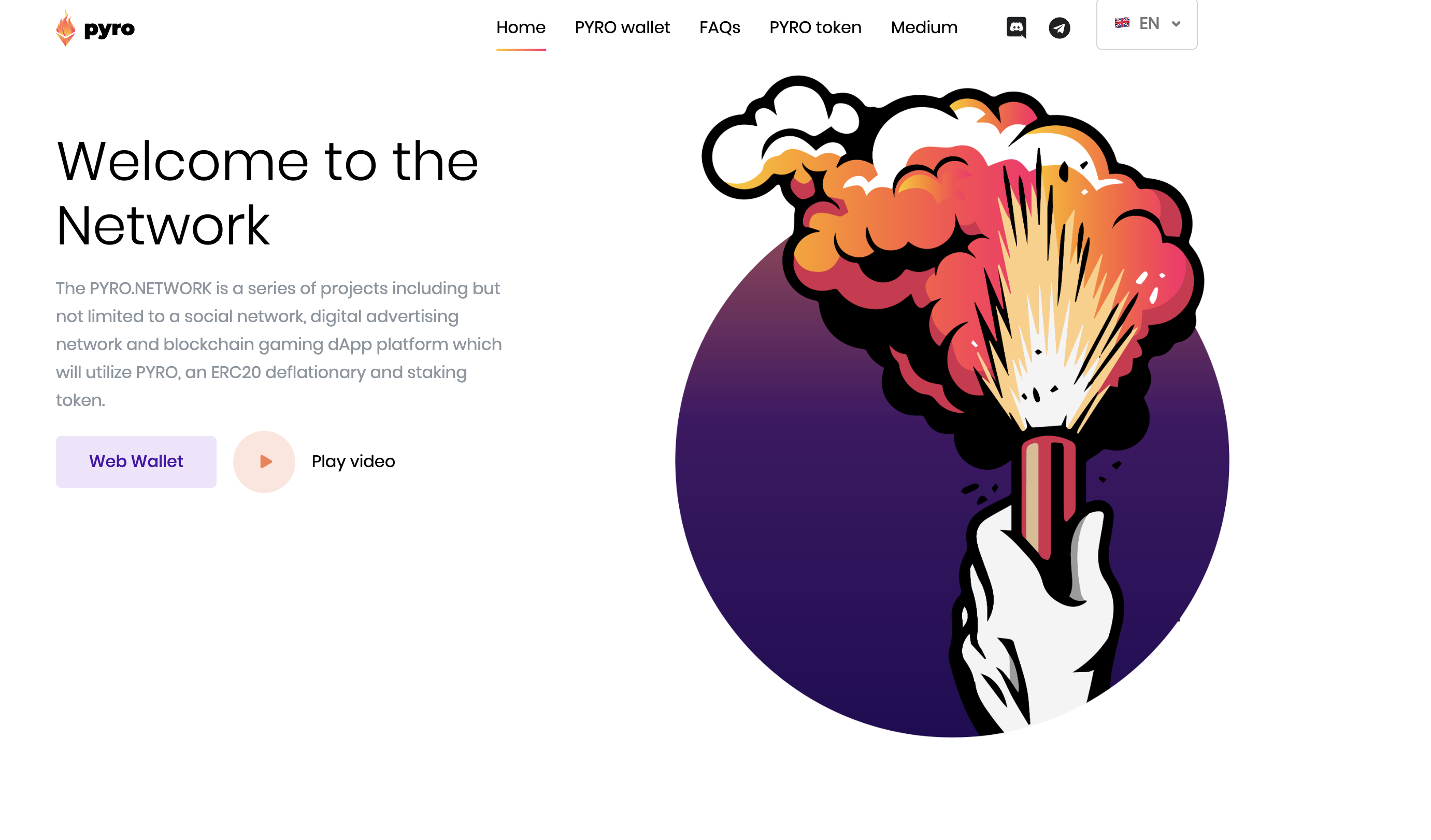 PYRO.NETWORK is a series of projects including but not limited to a social network, digital advertising network, and blockchain gaming dapp platform, all of which will use PYRO, an ERC20 token design with deflationary and staking capabilities.

WHAT IS PYRO (TOKEN)?

PYRO is the focal point of the PYRO.NETWORK. It’s an ERC20 token developed on the Ethereum blockchain that has deflationary and staking functionality. The PYRO token will be used for all the applications being developed for PYRO.NETWORK. PYRO will be used by several decentralized games running on the Ethereum blockchain, a brand new social networking platform, an advertising platform and many more applications.

HOW IS PYRO DIFFERENT THAN OTHER DEFLATIONARY TOKENS?

We’ve all witnessed the influx of experimental deflationary tokens in mid to late 2019, most of which are currently inactive or have been abandoned by the developers because they did not have any vision for their copy and paste token apart from the fact that they had an automatic reduction feature for their maximum supply. PYRO is so much more than that. The smart contract was designed from scratch and given new features which separates PYRO from the other token projects. PYRO has features like staking which users are rewarded 2.5% from every burned transaction proportionate to their staked amount, a 1% floor to prevent the supply from self-destructing and an entire ecosystem being built around it to give it utility.

-Initial Supply: 1 Billion
-Final Supply: 10 million (1% of initial supply)
-Burn Rate: 5% for each transaction, with the exception of whitelisted addresses such as airdrop distribution contracts, decentralized exchange contracts, etc.
-Staking Rewards: 2.5% of all the transactions made will be distributed among stakers proportional to the amount they are staking.
-Staking Fee: A 5% fee is incurred upon “unfreezing” your tokens. The amount is then distributed to remaining stakers.
-Decimals: 18

HOW TO EARN PYRO?

When the social network launches, users will be rewarded points for their activity on the platform. These points can be redeemed for Pyro tokens.

Content creators and publishers will be able to earn PYRO for promoting brands and helping out advertisers.

By simply using the web wallet built into the PYRO.NETWORK website, users can lock in PYRO and receive passive rewards. 2.5% of all the transactions made will be distributed among stakers proportional to the amount they are staking.